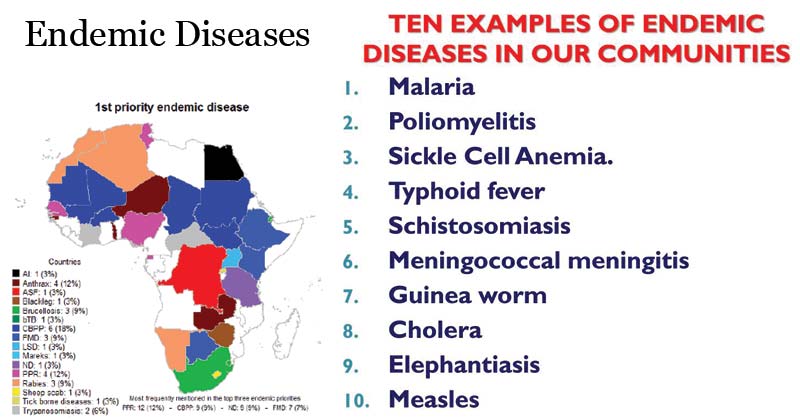 About 7.6 million people are infected with Chagas disease. It is caused by a protozoan parasite, Trypanosoma cruzi. This disease is endemic to Mexico, South, and Central America. Chagas disease is divided into acute phase, asymptomatic intermediate phase, and the chronic phase.

Malaria is an endemic disease prevalent in Africa, Asia, Latin America, and the Middle East. It is transmitted by a protozoan parasite from the Plasmodium genus. They destroy the red blood cells in the spleen and liver. This causes anemia in the patients and can prove fatal if left untreated. According to recent research, 200 to 500 million people suffer from malaria every year out of which 1.5 to 2.7 million do not survive.

This disease is caused by a protozoan parasite belonging to two different species of the Trypanosoma genus. This disease is prevalent in Sub-Saharan Africa. It causes fever, joint pain, sweating, and headaches. Slowly the parasite invades the central nervous system and causes a disturbance in the sleep cycle, poor coordination, and confusion. Endemic diseases are often confused with epidemic diseases. An epidemic is an outbreak of a disease, however, the endemic disease is the one that is constantly prevalent in a particular geographical area.

There are various types of methods to control these diseases.