Under certain conditions, complement proteins or more commonly, incomplete antibodies (IgG) attach to red cell membrane by the Fab portion of the immunoglobulin. These cells are said to be sensitized. Sensitization of red cells can occur in vivo or vitro.  The IgG molecules attached to the red cells are unable to bridge the gap between sensitized red cells which are separated from each other by the negative charge on their surface and as a result of which the sensitized red cells do not agglutinate.

Adding of the Coomb’s reagent (antiglobulin serum) however, completes the reaction. When the serum is added to the sensitized cells, the Fab portion of the anti-human globulin molecule (anti-IgG) reacts with the Fc portions of two adjacent IgG molecules attached to red cells thereby bridge the gap between sensitized red cells and cause agglutination.

Thus, if human IgG antibody has already attached to the patient’s red cells in vivo (in the bloodstream), or the patient serum contains incomplete antibodies that can attach to RBCs in-vitro, then the addition of anti-human IgG will cause the cells to agglutinate. This is a positive Coomb’s test. 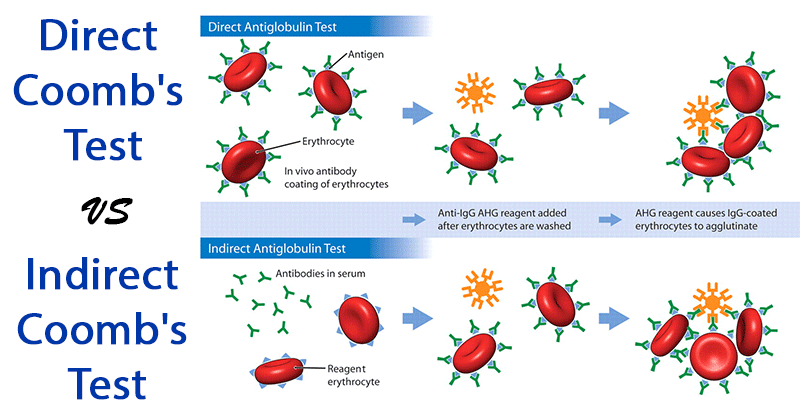 Positive:  A clumping of the red blood cells (agglutination) during the test.

Agglutination of blood cells during a direct Coomb’s test suggests that antibodies may be present on red blood cells of the patient and that the condition of hemolysis may persist.

Agglutination of blood cells during an indirect Coomb’s test suggest the presence of antibodies circulating in bloodstream that could cause the immune system to react to any red blood cells that are considered foreign to the body — particularly those that may be present during a blood transfusion.

Negative: No clumping or agglutination of red blood cells.