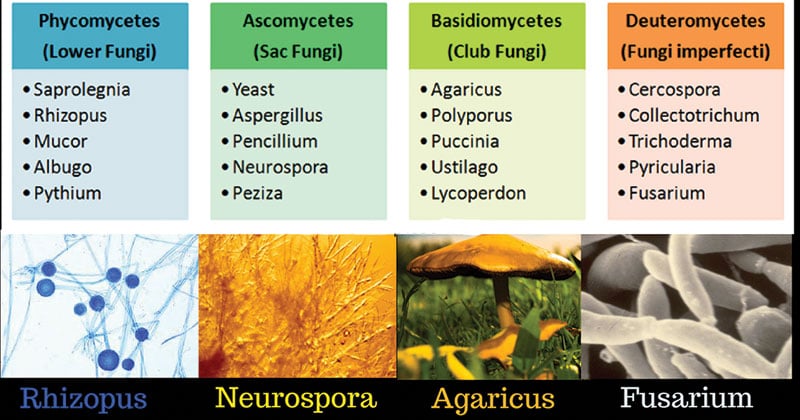 It includes a single class Acrasiomycetes.

It is divided into two classes:

Class 3 Plasmodiophoromycetes- Parasitic fungi producing biflagellate motile cells with both the flagella of whiplash type inserted at the anterior end.

Class 1 Basidiomycetes: it is split into 3 sub clases:

It includes imperfect fungi in which sexual stage is unknown. It comprises a single form class.

On the Basis of Spore Production

On the basis of the organisation of the vegetative thallus, the morphology of reproductive structures, the way of spores production and particular life cycle involved the kingdom mycota is classified into following divisions.

Classification Based on Site

Mycoses are classified as superficial, cutaneous, subcutaneous, or systemic (deep) infections depending on the type and degree of tissue involvement and the host response to the pathogen.

Superficial mycoses (or tineas) mostly occur in the tropics and are restricted to the outer surface of the hair and skin. Examples are:

Cutaneous mycoses. There are three genera of fungi that commonly cause disease in the non-living tissues of skin, hair, or nails/claws of people and animals, by growing in a zone just above where the protein keratin is deposited.

These three genera are Microsporum, Trichophyton and Epidermophyton (all filamentous Ascomycota) and they are often labelled ‘dermatophytes’ (with the disease being called ‘dermatophytosis’) although, of course, they are not plants, so they can’t be any sort of ‘-phyte’ and a better term would be dermatomycosis. These fungi all have the ability to degrade keratin and grow as non-invasive saprotrophs on skin and its appendages, but their growth causes irritation and inflammation of underlying epithelial cells, this being an allergic reaction that may result in death of these cells.

Subcutaneous mycoses are generally caused by fungi that are normally saprotrophic inhabitants of soil, particularly in tropical and subtropical areas of Africa, India and South America, which become infective by being introduced through wounds in the skin. Most infections involve people who normally walk barefoot.

Systemic mycoses are infections that affect the whole body. We divide these into mycoses due to primary (usually dimorphic) virulent pathogens, and those due to opportunistic pathogens.

Classification Based on Route of Acquisition

Classification Based on Virulence

2 thoughts on “Classification of Fungi”