Chocolate agar is essentially the same as blood agar except that during preparation the red blood cells are lysed when added to molten agar base. As a result, the cell lysis releases intracellular nutrients such as hemoglobin, hemin (“X” factor), and the coenzyme nicotinamide adenine dinucleotide (NAD or “V” factor) into the agar which is utilized by fastidious bacteria. Red blood cell lysis gives the medium a chocolate-brown coloration when prepared from which the agar gets its name. The most common bacterial pathogens that require this enriched medium for growth include Neisseria gonorrhoeae and Haemophilus species. 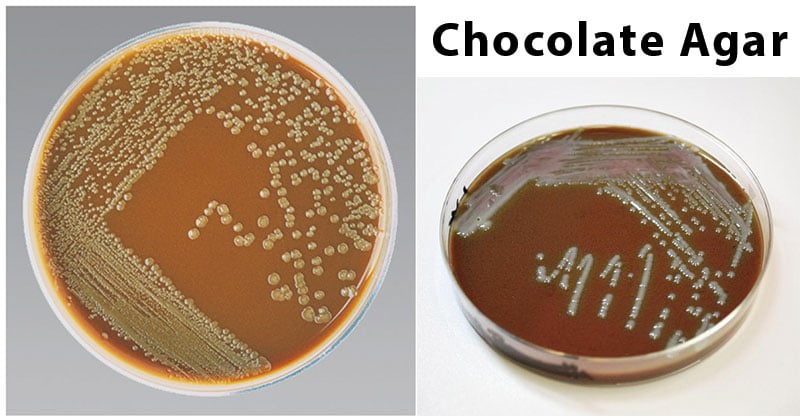 Preparation of the hemoglobin solution

Chocolate Agar Base, with the addition of supplements, gives excellent growth of the fastidious organisms without overgrowth by contaminating organisms. Casein and animal tissue digest that provides the organism with nitrogenous nutrients, amino acids, and other elements essential for the growth of the organisms. As Neisseria species are highly sensitive to toxic substances such as fatty acids, hence the addition of cornstarch helps neutralize possible toxic metabolites, while potassium phosphate helps maintain a uniform pH during growth. Sodium chloride maintains osmotic equilibrium thereby maintaining the integrity of cells. Chocolate agar is also considered as a variant of the blood agar plate, containing red blood cells that have been lysed by slowly heating to 80°C. The heat inactivates enzymes which could otherwise degrade NAD. The added supplements provide the necessary X factor (from Haemoglobin) and V factor (from Growth Supplement) required by the fastidious organisms.

Some modifications can also be made for the growth of the specific organism. Thayer-Martin Media is a chocolate agar supplemented with vancomycin, nystatin, and colistin to inhibit the normal flora, including nonpathogenic Neisseria for the selective isolation of N. gonorrhoeae and N. meningitidis. Chocolate Agar supplemented with bacitracin is a selective medium used to improve the primary isolation of H. influenzae from specimens containing a mixed flora of bacteria and/or fungi. Chocolate agar supplemented with GC base and growth supplement is another modification that supports the special growth requirements (hemin and NAD) needed for the isolation of fastidious organisms, such as H. influenzae when incubated at 35-37°C in a 5% CO2 atmosphere.