WHO has published a global TB report every year since 1997. The main aim of the report is to provide a comprehensive and up-to-date assessment of the TB epidemic, and of progress in prevention, diagnosis and treatment of the disease at global, regional and country levels. This is done in the context of recommended global TB strategies and targets endorsed by WHO’s Member States and broader development goals set by the United Nations (UN). 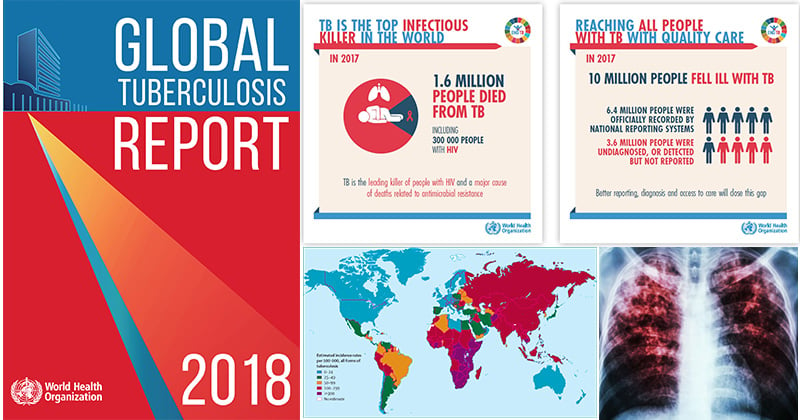 The 2018 edition of the global TB report was released on 18 September, in the lead up to the first-ever UN High Level Meeting on TB on 26 September 2018.

The data in this report are updated annually.

Please note that direct comparisons between estimates of TB disease burden in the latest report and previous reports are not appropriate. The most recent time-series of estimates are published in the 2018 global TB report.

TB is an infectious disease caused by the bacillus Mycobacterium tuberculosis. It typically affects the lungs (pulmonary TB), but can also affect other sites (extrapulmonary TB). The disease is spread when people who are sick with pulmonary TB expel bacteria into the air, for example by coughing.

A relatively small proportion (5–10%) of the estimated 1.7 billion people infected with M. tuberculosis will develop TB disease during their lifetime. However, the probability of developing TB disease is much higher among people infected with HIV; it is also higher among people affected by risk factors such as undernutrition, diabetes, smoking and alcohol consumption.

Overall, about 90% of cases occur among adults, with more cases among men than women. The male:female ratio among adults is approximately 2:1.

Diagnostic tests for TB disease include:

Globally, use of rapid molecular tests is increasing, and many countries are phasing out the use of smear microscopy for diagnostic purposes (although microscopy and culture remain necessary for treatment monitoring).

There are also tests for TB that is resistant to firstline and second-line anti-TB drugs. They include Xpert MTB/RIF, which simultaneously tests for TB and resistance to rifampicin (the most effective first-line anti-TB drug); rapid line probe assays (LPAs) that test for resistance to rifampicin and isoniazid (referred to as first–line LPAs); a rapid LPA that tests for resistance to fluoroquinolones and injectable anti-TB drugs (referred to as a second-line LPA); and sequencing technologies. First-line LPAs were first recommended by WHO in 2008; the second-line LPA was first recommended in May 2016. Culture-based methods currently remain the reference standard for drug susceptibility testing.

Without treatment, the mortality rate from TB is high. Studies of the natural history of TB disease in the absence of treatment with anti-TB drugs (conducted before drug treatments became available) found that about 70% of individuals with sputum smear-positive pulmonary TB died within 10 years of being diagnosed, as did about 20% of people with culture-positive (but smear-negative) pulmonary TB [a].

Effective drug treatments were first developed in the 1940s. The currently recommended treatment for cases of drug-susceptible TB is a 6-month regimen of four first-line drugs: isoniazid, rifampicin, ethambutol and pyrazinamide. The Global TB Drug Facility supplies a complete 6-month course for about US$ 40 per person. Treatment success rates of at least 85% for cases of drug-susceptible TB are regularly reported to WHO by its 194 Member States. Treatment for rifampicin-resistant TB (RR-TB) and multi-drug-resistant TB (MDR-TB) [b] is longer, and requires more expensive (≥US$ 1000 per person) and more toxic drugs. The latest data reported to WHO show a treatment success rate for MDR-TB of 55%, globally.

There are 20 TB drugs in clinical trials, and combination regimens that include new compounds as well as other drugs are also being tested in clinical trials. The bacille Calmette-Guérin (BCG) vaccine, which was developed almost 100 years ago and has been shown to prevent severe forms of TB in children, is still widely used. However, there is currently no vaccine that is effective in preventing TB disease in adults, either before or after exposure to TB infection. There are 12 TB vaccines in Phase I, Phase II or Phase III trials.