Definition and overview of a plant cell

Plant cells are multicellular eukaryotic cells that make up a plant (a group of eukaryotes belonging to the Plantae kingdom, with the ability to synthesis their own food using water, Sunlight and CO2). Being eukaryotic cells, they have a defined nucleus with specialized structural organelles that enable it to function in an orderly manner.

The plant cell has a well-defined cell wall made up of cellulose components, plastids that perform photosynthesis and storage of carbohydrate in form of starch, central vacuoles for regulating the cell’s turgor pressure and a nucleus which controls the cells’ general mechanisms including reproduction of the plant cells. There are several plant cell organelles that are well defined and described in Plant cell- definition, labeled diagram, structure, parts, organelles.

These systems are structured differently, defined by sets of specialized mature cells that perform a wide range of functions ranging from protection, support, metabolism, reproduction enabling plant growth, and development. For example, plant cells are formed at the meristem which multiple and grows to for plant tissues. These tissues are:

Plant cells multiply by cell division, a mechanism known as Mitosis, which takes place within its nucleus. This begins at the meristem, that is found at the tip of the root and/or the shoot of vascular plants. Meristems at the tips are known as apical and lateral meristems. Apical meristems are responsible for producing the roots while the lateral meristems produce secondary growth of the stem wood and cork.

Besides cell division of the cells that leads to the formation of tissues that eventually creates a plant, there are other features of the plant cells that are of importance to plant growth and metabolisms.

As described above, plant cells originate from the tip of the plant roots. The development of other cells is facilitated by the initial multiplication that takes at the tip, from the undifferentiated meristematic cells to form other specialized cells and cell tissues. 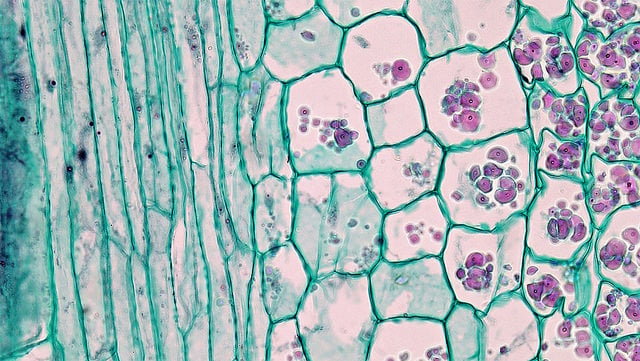 They are live thin-walled cells with permeable walls that are undifferentiated. They do not have a specialized structure hence they easily adapt and differentiate into a variety of cells performing different functions. There are two types of parenchyma cells

Palisade parenchyma cells are columnar elongated structured cells found in a variety of leaves, lying below the epidermal tissue. Palisades are closely linked cells in layers of mesophyll cells found in leaf cells.

Ray parenchyma has both radial and horizontal arrangement majorly found within the stem wood of the plant.

Functions of the Parenchyma cells

Functions of the Collenchyma cells

There are two types of sclerenchyma cells

Functions of the sclerenchyma cells

Xylem cells are complex cells found in the vascular tissues of plants, mostly in woody plants.

Functions of the xylem cells

The primary function of the xylem cells is to transport water and soluble nutrients, minerals and inorganic ions upwardly from the roots of the plants and its parts. These elements flow freely through the xylem tracheids and vessel elements with the aid of the xylem sap.

There are two types of phloem cells:

Functions of the phloem cells

It transports dissolved foods and organic materials throughout the plants since it has the ability to move the materials in all directions of the plant, depending on the age of the plant.

Structure of the meristematic cells

There are three types of meristematic cells classified according to the tissue they exist in.

Functions of the meristematic cells

There are three types of epidermal cells that play the primary role of protecting the plant from environmental factors such as high temperatures, pathogens, chemical exposures e.g. radiations. They include:

Structure and Functions of Epidermal Cells

Figure: Diagram of trichomes and stomata. Source: University of Florida