This demanded a broader concept of disease causation that synthesized the basic factors of agent, host, and environment focus on different classes of factors, especially with regard to infectious diseases. 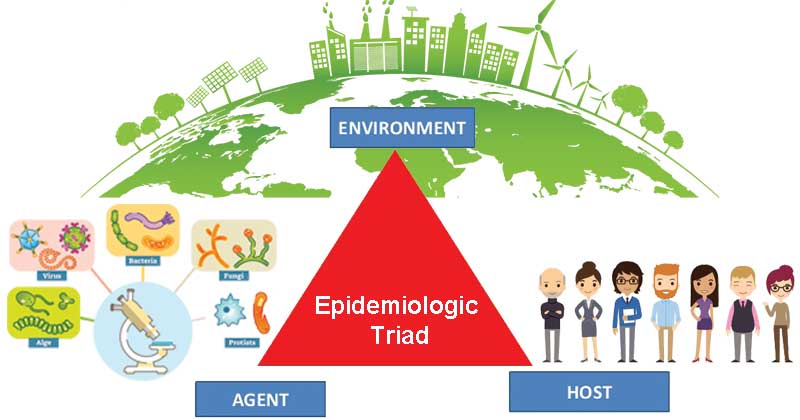 The best way to understand the epidemiologic triangle is to see how epidemiologists use it to explain the spread of existing diseases.

HIV is a viral infection that targets a person’s immune system opens in a new window, making it more vulnerable to other forms of infection. Because the virus targets the immune system itself, the body cannot effectively fight HIV on its own. HIV is communicated through direct contact with an infected person’s bodily fluids, and it primarily spreads through sexual contact or shared needles.

Scientists theorize that HIV was originally carried by chimpanzees and that humans who hunted these chimpanzees for meat became infected with a mutated form of the virus upon contact with the chimpanzees’ blood. HIV can be transmitted when a bodily fluid such as blood comes into contact with a mucous membrane or damaged tissue (such as an open wound or the mucous membranes found inside the mouth).

There are a number of socio-economic factors that can impact the spread of HIV opens in a new window within a community. Communities with higher concentrations of sexually transmitted diseases and lower incidences of reporting — due to social pressure or otherwise — allow HIV to flourish. Poverty limits access to care and treatment, and discrimination can discourage individuals from being tested or seeking care.