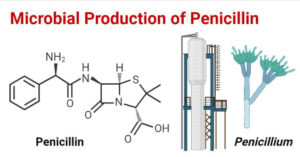 What is Penicillin? Alexander Fleming in September 1928 accidentally discovered Penicillin. He found that the fungus, Penicillium notatum prevented the growth of bacteria, Staphylococcus spp.. Later Clutterbuck and his colleagues in 1932 studied the nature of Penicillin and found it as an organic acid that dissolves into the organic solvent at low PH. Chain et al in 1940 cultured fungus and extracted powdered form of Penicillin. Later, at the time of the second world war, Penicillin production was done and … Read more 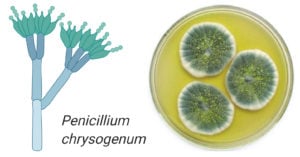 Figure: Penicillium chrysogenum. Image Source: Pinterest, created using biorender.com Penicillium chrysogenum is also known as Penicillium notatum, the first Penicillium fungi used for the isolation of penicillin antibiotics, which is used for the treatment of Gram-positive bacteria. It is also used in the production of other β-lactam antibiotics. It is an allergen and has pathogenic activity however it is uncommon in causing disease in humans. Incidences of opportunistic infections by P.chrysogenum have however been reported, causing infections in immune-compromised persons … Read more