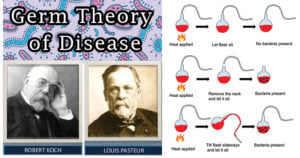 Before the Germ theory of disease, the causes suggested for the occurrence of disease were the effect of supernatural phenomena like planetary alignments, effect of bad bodily humors and the faulty environment. For example, in ancient Greece, it was thought that disease was spread not via direct contact with other infected individuals, but rather via infectious “seeds” in the air or food products. The predominant theory until germ theory of disease was eventually accepted in the 19th century was termed … Read more 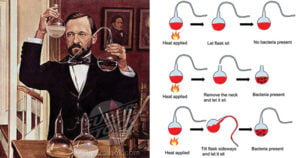 Louis Pasteur was a French chemist and microbiologist considered the most important founders of Microbiology. Microbiology developed as a scientific discipline from the era of Louis Pasteur (1822- 1895) himself. He first coined the term “microbiology” for the study of organisms of microscopic size. For his innumerable contributions in the field, he is also known as the Father of Microbiology. He is renowned for his discoveries of the principles of vaccination, microbial fermentation and pasteurization. He is remembered for his remarkable breakthroughs in the causes and … Read more